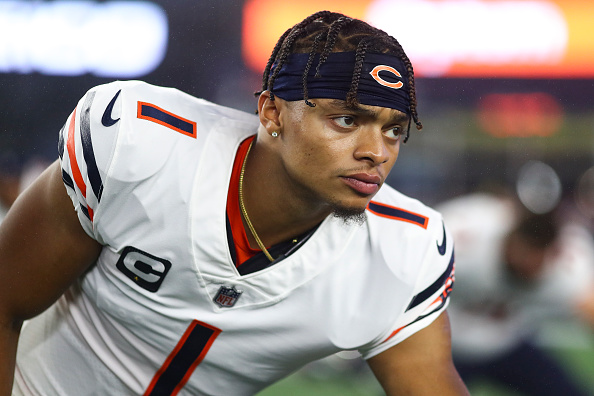 The Chicago Bears had the NFL’s second-best rushing attack coming into their tilt on Monday Night Football. They left out with the best of them all. So, it wasn’t necessarily a renewed commitment to the ground attack that led to their rolling up 243 yards on the ground against the New England Patriots.

But they did alter their approach to that dedication that also had them fourth in attempts going into that game and sitting in second place now.

After the game, quarterback Justin Fields – who had a career-high 14 carries for 82 yards – provided a little insight into how the Bears took advantage of their bye week. He also revealed from where they drew inspiration for the shift.

After the Bears’ narrow 12-7 loss to the Washington Commanders at home on Thursday Night Football, head coach Matt Eberflus said he would use the break to reassess everything. That included the lineup after miscues cost them back-to-back games late. It also included their offensive scheme that had ranked 28th in yards per game

That was mostly thanks to a moribund passing attack that still ranks 30th in touchdowns and dead last in attempts and yards.

What was the solution to generating offense and, in some ways, hiding the quarterback and line? The Bears were inspired by one of the most unique players in league history: former NFL MVP and Baltimore Ravens quarterback Lamar Jackson.

“It just brings another whole element to our offense, stealing some plays from the Ravens,” Fields said after the game. “Yup-yup-yup. We got a couple of ones from them.” (h/t Mark Grote/670 The Score)