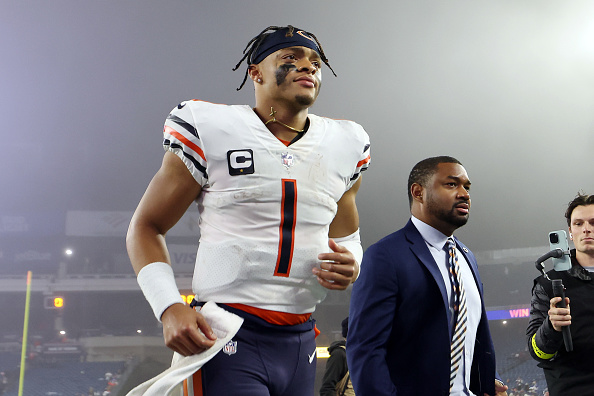 The NFL can be a fickle place as the Chicago Bears know all too well. Just a week ago they were under fire for dropping a close game at home against the Washington Commanders in primetime. Flash forward just 11 days and, while perhaps not fully sold just yet, folks are coming around to, not only quarterback Justin Fields but also the people in charge of getting the Bears out of misery.

And it’s all because they went into Foxboro and exorcised a laundry list of demons – some not even their own – and took down Bill Belichick and the New England Patriots on Monday Night Football with a 33-14 final tally.

It was a game that showcased the best of all three phases for a team that had previously gotten in its own way more often than not coming in.

No one embodied that more than the Bears’ second-year passer.

Former NFL tight end-turned-analyst Clay Harbor took to Twitter to highlight a sequence by Fields. It was in the first quarter. The Bears led by three points and were already nearing the red zone around New England’s 34-yard line. In the first half of the clip, Fields goes through his reads before coming back to find former Patriot N’Keal Harry in the middle of the Field.

He followed that up with a scramble that saw him get down quickly rather than risk taking a big hit trying to fight for extra yardage.

After a David Montgomery run on the ensuing play, Fields took it himself for a three-yard score.

That put the Bears up 10-0. But they were far from in the clear as the Patriots scored back-to-back touchdowns following a change at quarterback from Mac Jones to Bailey Zappe and an interception from Fields.