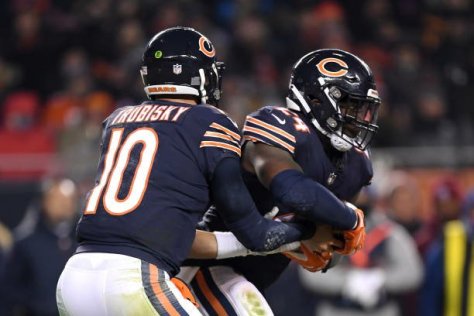 CHICAGO — Bears quarterback Mitchell Trubisky returned to action Sunday night after missing the previous two contests with a shoulder injury. He finished 16 of 30 for 110 yards and three interceptions. Bad interceptions.

Whether the injury or rust was the cause of his erratic play last night remains to be seen. To clarify: Trubisky has been perhaps the most erratic quarterback in the NFL this year. It goes deeper than game-to-game or even series-to-series. Trubisky will look like two completely different quarterbacks from one play to the next. It is a major flaw, but is something he had done better with before getting injured.

Prior to Sunday night, Trubisky had not completed less than 60 percent of his passes since week eight against the hapless Jets; a game he finished with two touchdowns and zero intercepts. In fact, this was only the third game of the season with a completion percentage in the 50s.

Look, Mitch still makes too many bad throws, period. His reads are usually correct however. He has also shown the ability to make every throw, and we know about his running ability. Where he lacks is consistency, but that will come as he continues building chemistry with his surrounding cast.

The Green Bay Packers come to the lakefront next week. They just embarrassed Matt Ryan and the Falcons for a 34-20 victory. It was not nearly as close as the final score suggests.

Surely they would love nothing more than to hang a loss on the Bears in defiance of any changing-of-the-guard narrative. A Bears win not only locks up the first playoff appearance since 2010, it would also put a nice little bow on what has been fascinating season to follow.